Given that TV households represent 96.7% of total households and that multichannel households represent about 85% of TV households, satisfaction with television by the most reasonable measure is pretty high. However, there are still some TV problems to solve and today I put forward a modest proposal that eschews cannibalism and would dramatically improve things with respect to one problem:  navigating the hundreds of channels on digital cable.

Here's the model of how to dramatically improve the live TV viewing experience. 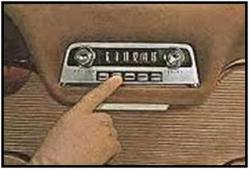 Yes, it is straight out of the 1960s. You can freely tune any channel on the dial, but you can pre-set buttons for easy access to your favorites and you can pick which button has which station.

How this would work for multichannel television:  Let me organize my channel lineup so that the channels that I watch the most are at the start of the dial. If the average household watches only 16 channels, those 16 channels would be the first 16 on the dial, irrespective of where the cable operator has chosen to place them on the dial.

For the occasional viewing of the other channels, those could be in numerical or alphabetical order above the "first 16".

The first 16 could be set in a few ways. The default mechanism based on the most viewed 16 channels in the household after a period of a few weeks of startup data collection (you do know the set-top box knows what you are watching, don't you?). Before there is sufficient data, during that first few weeks, the 16 could be based on the top channels in the DMA or the zip code. This default list would be customized for those with HD sets, naturally.

And of course, for those so inclined, these settings could be tweaked by the user at his or her computer (including the setting the top group to be more or fewer than 16 channels).

For Internet stream of a 24-hour channel (e.g., a feed received by a Roku), that URL could be added as well. (The issue of switching between the cable box and the Roku is, alas a thornier problem -- see below). The feed for a single game from something like the Internet-delivered version of MLB Extra Innings may be a bit tougher, but, theoretically, MLB could create a single URL for each team's live game (actually, more likely, two, another for the Spanish audio feed).

The great news about this approach, if you are a multichannel provider, is that you alone can provide this functionality.

The great news about this approach if you are an end-user is that, if your provider does not, hopefully soon you might have some choices in TV navigation, as the multichannel providers move to virtual boxes (Comcast's Xfinity TV, AT&T's U-Verse and Verizon's FiOS are already on/coming to Xbox). Perhaps then we'll get the implementation of television navigation the way we really want it: with a smart switcher box that seamlessly incorporates live and on-demand programming from a variety of sources, organized the way the user desires.