Aereo launched its beta yesterday in the New York City DMA. For those unfamiliar with the company, formerly known as Bamboom, it will rent tiny digital antennas to people and then transmit TV signals to those people from "their" antenna via the Internet so that users can watch it on their computer or tablet or phone. If the "renting an antenna" part sounds odd, it makes sense because consumers can transmit content from a device that they have rented to themselves according to the precedent in the Cablevision "network DVR" case, although that didn't fit in the somewhat-similar Zediva "remote DVD player" case.

How tiny are the antennas?  This tiny. That's a good thing since Aereo needs one for every customer it signs up. 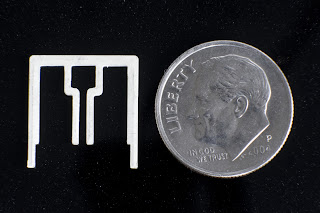 While it might appear that getting TV on one's computer, tablet or phone is the raison d'etre for the service, Aereo looks much more significant to me for other reasons. The first and biggest is that it appears that Aereo may be the first company to offer a service that provides broadcast TV programming without entering into retransmission consent agreements with the broadcast stations. This is significant because the strong stations are collecting increasingly healthy fees for providing their retransmission consent to cable, DBS and telco multichannel providers. (The service provided by ivi TV provided broadcast content without retransmission consent, but ivi lost that suit and was forced to shut down, although the decision has been appealed).

If Aereo's approach withstands the inevitable legal challenges, that precedent could give some multichannel providers a work-around to avoid paying retransmission consent fees themselves. The ironies are rich and multiple:  Aereo's approach takes advantage of the long-standing way that people received television -- pulling down the signals with an antenna. Most broadcasters consider cable their enemy, in fact, the broadcaster's own over-the-air signal itself is the root of this threat to their revenue. Cable which was originally seen by broadcasters as helping them expand the reach of their stations and the stations' advertising and then became the enemy when it competed for viewers is now the savior as it provides retransmission consent fees.

Aereo's consumer offering stakes out a unique place in the market. For $12 per month, a customer gets the service equivalent to a 2-tuner DVR connected to an antenna. The closest alternative to that is probably TiVo's $19.99 per month service which requires the use of its box (the least expensive of which is about $100) and, of course, an antenna. There are other options, most of which involve using your computer to do the recording and an antenna to pull down the signal, typically with no monthly fees. These options have not been that popular in the marketplace despite being available for years, perhaps, like many computer solutions, they haven't gelled yet to reach the mass market.

Aereo's approach also suggests a possible work-around for cable. Instead of a single master antenna pulling down a station's signal and distributing it to many subscribers, perhaps the cable company could create its own array of many little antennas and rents one to each subscriber and distribute those signals to the subscriber via IP. The problem for the cable operator is that doing such a thing in lieu of its current carriage would be illegal:  the cable operator is required by law to provide the broadcast stations to all video subscribers. It wouldn't be illegal for DBS to do so however. DBS has no such forced buy-through. I would think it would not be difficult to build Aereo's service (or their own version of it) into an Internet-connected DirecTV or Dish set-top. It would not be hard to see the cable industry lobbyists sinking their teeth into this opportunity shortly thereafter.

One other thing that Aereo supports, if it survives, is over-the-top substitution in general. Right now all consumer solutions that involve replacing subscription multichannel television involve getting good reception on an antenna on your own premises. Certainly there are those that might take a cord-cutting or cord-shaving step that do not meet that standard either because the location cannot receive a good signal (e.g., in a valley) or because putting up an antenna that can is inconvenient or impractical (e.g., in an apartment building). Aereo could represent an attractive option for that group.