It looks like AMC Networks is heading for two showdowns tomorrow, as AT&T has joined Dish in threatening to yank the programmer's channels. While the cover story is the same for both distributors -- the proposed rates for AMC's channels are too high and represent a poor value -- the story is more credible for AT&T. Dish, after all, is facing what appears to be the losing end of a lawsuit with AMC Networks over the defunct Voom networks and, if dropping the AMC services can improve the terms of that settlement, that's pretty rational behavior (my prior post on this subject). AT&T has no such issue. The following statement is on AT&T's web site for program disputes:  att.com/fighting4you (obviously, AT&T is planning to have more similar disputes). Knowing how these sort of things are often taken down after a settlement, I am reposting it here for posterity:

The AT&T* U-verse® TV contract with AMC Networks for channels including AMC, IFC and WE tv, expires at 11:59 p.m. EST on June 30. AT&T issued the following statement:
We are making every effort to reach a fair agreement and continue providing these channels to our customers. Frankly, we’re disappointed AMC Networks has decided to take its negotiations public, instead of working with us in good faith, especially since we’re still actively in negotiations. We’ve been in ongoing negotiations to renew this agreement, but AMC Networks is seeking an excessive rate increase in our overall fees for the right to deliver these channels. AMC Networks is asking thatAT&T pay what we believe is nearly double what other competitors pay - including a smaller-sized competitor. We believe the rates they are seeking are disproportionate compared to the viewership we see across their channels. We don’t think that’s reasonable, especially in these economic times, and we will continue to work toward a fair deal.
There’s an ongoing industry trend in which an increasing number of content providers seek unreasonable price increases from their service providers as those contracts expire. If we accept this cost increase from AMC Networks, it could result in higher prices for customers, and would only encourage other content providers to make similar demands. We don’t want customers to lose these channels, but we need to take a stand now to keep costs down while continuing to provide the quality programming customers want and deserve.

Observers of the industry know that this statement suggests a desire, on the part of AT&T, for Most Favored Nation treatment with respect to its rates for the AMC Networks services and that AT&T has passed AMC's former parent, Cablevision, in terms of basic cable subscribers, per the National Cable Television Association. The merits of AT&T's position can be debated and I suspect are not relevant at all to consumers. Fundamentally, AT&T is making a wise move if the AMC channels are not bringing benefits to their customers equal to their prices. Analyses of channel value are often pretty hard to do, except at the extremes -- the channels that are worth little are usually not difficult to negotiate and those worth a lot are generally well understood. The interesting part of AT&T's negotiation is the opportunity that presented itself to AT&T -- to pick a second fight with a programmer already fighting one battle. As any general knows, it is nice when the opponent's army is divided. One thing that I do know, no customer subscribes to cable TV to NOT get the channels they want. Typically settlements of these disputes are reached in a modest amount of time. A key date for this one is 15 July 2012, the date of the season premiere of AMC's acclaimed drama Breaking Bad.


Updated (3 July 2012): AT&T and AMC Networks settled shortly after the old deal's midnight expiration without any inconvenience to AT&T subscribers. As is usual, the financial details were not disclosed.
Posted by Peter Litman at 9:55 PM 0 comments

More on the Ikea TV

While the focus of my work (and this site) is the business of television, especially its distribution, I have become enchanted with the concept of a simpler TV experience. Navigation could be a whole lot better (both within the channel guide and between the different possible sources of material) and someone, someday, will do something about the multitude of wires (that is someone other than a custom A/V installer).

I wrote about the Ikea TV (product name Uppleva) in an earlier post. At the time it was little more than a press release, but a new article reveals a lot more about the product (which is due to be released in Italy, France, Germany, Poland, and, natch, Sweden, later this month) and the concept is growing on me the more I read about it. 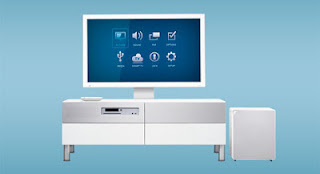 The Uppleva is due to arrive Stateside in April 2013.

Dish-AMC Fight Breaks Out on a New Front -- Channel Placement

According to deadline.com, last night Dish escalated its fight with AMC Networks by relocating several of its channels from their usual places on the dial to the television equivalent of Siberia. While distributors typically have the right to determine the placement of a channel on their lineups, the point is often negotiated and I don't recall ever seeing this sort of move used as a negotiating tactic.

To complete the picture:

As far as I can best tell, the AMC Networks channels' new neighbors are:

As a negotiating tactic for Dish, its got its advantages. Moving a channel to a less trafficked neighborhood should reduce live viewing and, to the extent that Dish's DVRs don't keep up with the change, it could reduce DVR viewing as well. The substitution of Style in WeTV's slot makes some sense; Style is now between its corporate siblings which cross-promote each other. Style is a nationally rated network with a defined niche. Content-wise Indieplex is somewhat similar to IFC, but with much less of a profile (for those unfamiliar, it has indie and art movies from the Starz and Encore libraries). Mark Cuban's HDNet is not at all like AMC, nor is it nearly as well known (and it will get less well known when it rebrands as AXS TV during the summer). Generally speaking, subscribers never like channel lineup changes -- change is disruptive and typically offers no apparent benefit, so Dish didn't do this to make its customers happier. As for Dish's explanation of the reason for the change "the new positions better reflect the channels' ratings", to be charitable, that seems most unlikely.

Added commentary on the matter, courtesy of Louis Peitzman of Jezebel: "In the ultimate dick move, Dish responded by relocating AMC to channel 9069 — right in the middle of a broadcast of The Killing." Nice turn of phrase.