Comcast announced a new service yesterday, called Streampix, which immediately sent the stock of Netflix down. While that's probably good news at Comcast's headquarters, the rationale behind the new service seems weak. 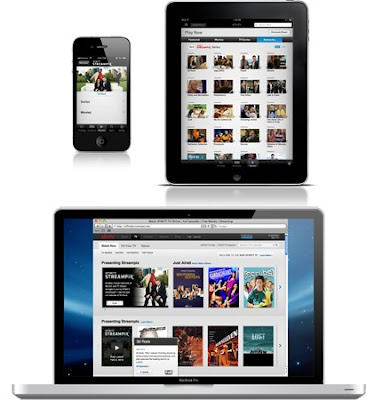 On the plus side, the service will be available on computers, tablets and phones (just like the picture above!) and it will cost only $4.99 (less than Netflix at $7.99!).

On the downside, it is only available to Comcast TV customers, so, it isn't a viable choice for, shall  we say roughly 80% of US households (Comcast reported 22.343 million video customers at year end 2011, there are 114.649 million US TV HHs this season per Nielsen (.pdf). That's a pretty big part of the market to ignore. More importantly, the programs and movies for which Comcast has acquired streaming rights are more than likely to overlap with programs and movies for which Comcast has acquired cable VOD rights.

This is less a Netflix competitor than a way to generate additional revenue out of Comcast's existing video base. There's nothing wrong with that, but that's a different kettle of fish. That's more like charging extra for TV Everywhere.

The Verizon-Redbox joint venture for a streaming service looks like more of a dead-on Netflix competitor.

Some other takes:
Benzinga is critical
GigaOm is more neutral
Engadget has the full press release
Posted by Peter Litman at 2:32 PM