Netflix on Cable, how could that work?

I was intrigued by a comment about Netflix at the recent Cable Show by Melinda Witmer, Time Warner Cable's Chief Programming Officer:  “Consumers are getting it on every device that’s coming on an IP basis today but not the set top. They look like a programmer to me and it makes me sense that we’d be doing business with them in the home on our equipment, too.”  The intriguing part of this is not that it makes sense, but that it is completely counter to the conventional wisdom that Netflix and cable companies are inherently competitors.
Netflix on cable offers the Netflix the following advantages:
Netflix on cable offers the cable operator the following advantages:
Netflix on a direct streaming basis costs a consumer $7.99 (plus applicable taxes). Presumably the cable operator would like to make some margin on the sale of Netflix. Cable customers could pay extra to get Netflix via the set-top box as it simplifies the home entertainment system by eliminating the need for another box to be connected to the TV (although relatively little of Netflix distribution to the TV is likely via a dedicated box like Roku -- game consoles are probably the biggest one and no one buys a game console primarily to get Netflix). Cable television has always been a premium product and its price reflects that.  After all, about 10% of cable customers buy only the basic broadcast level of service and the primary competitive service to that is free over-the-air television. Cable operators often sell their services for different prices than other providers in the marketplace (e.g., HBO's price on Comcast often has little similarity to its price on Verizon or DirecTV), although few services are available directly from the wholesaler (MLB.TV is such an example as it is a broadband delivered version of the Major League Baseball Extra Innings package sold by multichannel providers).  [Added:  In fact, that might be the biggest issue for a distributor; HBO might, not unreasonably, expect the same rights as Netflix, to be able sell direct to consumers.]
If Netflix expected 70% of retail revenue and it wanted the same $7.99 wholesale than it would get from a direct customer, then the retail price would have to be $11.41. 70-30 is the typical split for content providers in Apple's iTunes store and is a common split in Internet content-distribution relationships. If the retail price would stay at $7.99 and Netflix were to get a 70% split, that would make the wholesale take $5.59.
All things considered, both Netflix and the cable operator could benefit from the arrangement, so perhaps they would split the difference between these scenarios -- that would put the retail price at $9.70 and the wholesale rate at $6.79 -- rounding puts Netflix at $10 retail and $7 wholesale. For those who remember premium television pricing history, that sounds very conventional (and I mean that as a compliment).
Posted by Peter Litman at 5:37 PM 0 comments

I recently got an iPad, primarily to better understand the multichannel TV and over-the-top video apps that have generated so much discussion in the video business.

One of the biggest public disputes has been over the iPad app from Time Warner Cable, artlessly called TWCable TV.  Discovery, Fox and Viacom sued over the inclusion of their channels in the app.  While Discovery and Fox appear to have settled their issues with TWC, the Viacom services are still missing from the app.  The app works only in your home and only if you subscribe to both cable TV and broadband service from TWC.

The app is simple, good-looking and intuitive.  It is a fine start.

The app launches with a splash screen of a TWC logo on an avocado green background.  I have never seen that color associated with the company previously.  Much like the app's name, one wonders if the  branding people approved it.  [Addition:  I have since seen this green -- or a more lime-ish tint -- on TWC trucks, but the website graphics are blue, the color I had always associated with the company.]

It feels new.  This is not the clunky navigation from the set-top box ported to a new platform. It does feel like an iPad app.  It is a limited functionality app.  You can only watch live TV and only of the handful of channels that they have provided.  When you leave the app and return, it returns you to the last viewed channel, just like a regular TV

Sign up is via the TWC username and email that you need for programming your DVR from their website (which, by the way, doesn't work that well) and other account management functions.  Blessedly, this only needs to be done once.


The app only works in landscape orientation.  The guide is a translucent list of channels that appears on the left side and starts when you launch the app.  If you tap on on the screen on the right side, it goes away and the channel you are watching expands to fill the iPad's width (preserving the aspect ratio).
The guide fits eight channels at a time and displays the channel logo (small, not always that clear), the title of current show, one line of description about the episode and the start time and title of the next show.  When the guide comes up, a a translucent bar at the top also comes up that provides 2 buttons.  On the right is "Channel History" which which shows and provides one-click-access to the last four channels that you have viewed.  This is an interesting interface choice that adds some functionality to the ubiquitous "last channel" buttons on TV remotes.  On the left is the "Log Out" button, although I can't understand why anyone would ever do so in normal use. 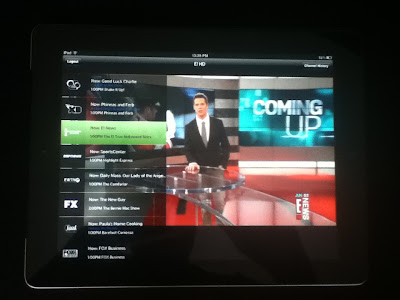 The guide and top bar will disappear on their own after a short while.  To bring back the guide, tap on the screen.  There is significant latency switching between channels.  This is not a dream device for ADD channel surfers.  The video generally worked well.  I had some experiences of waiting for it to reload/buffer video when I was not switching channels.
There is no way to reorder the channel lineup or bookmark favorite channels.

The channels carried are a mix of services, with a decided preference for HD versions, which is a little odd given the iPad's 4:3 aspect ratio.  The full list of the 73 channels carried is below; by my count 16 are SD channels.  The app originally launched with 32 channels.  It is unclear to me if the app's channel lineup can be revised on the fly or if TWC has to issue an updated version of the app whenever it wants to make a change.
What isn't carried:


Given how sports-driven most subscription television marketing is and how crucial sports is seen for most early adopter video innovations, there is little sports programming in the app.  Golf Channel is the only full-time sports service in the lineup.  None of the New York regional sports networks are available.  The ESPNs are not, except ESPNews; they are available on the WatchESPN app.  Versus, MLB, NBA, NHL, Tennis, Big Ten, Gol, Speed, Fox Soccer...none of them are available.  Nor are TNT and TBS which have significant slates of sports.  In contrast, women-targeted services are very well represented:  3 Lifetime services, E!, HGTV, Food, Oxygen, WE, Style and Wedding Central.
My television subscription includes all of the 73 channels listed below.  It is unclear to me if TWC blocks out the digital tier or HD channels for customers who do not subscribe to them. Conversely, I wonder if some of the foreign language services that I do not see on the app are available to other customers who do subscribe to them.
There is no access to the recorded content on your DVR.  There is no closed captioning or SAP.  There is no-access to any on demand content.  The only "switch" in the settings panel is "Remember password".  This is version 1.0.2008 of the software.
In short, if you have an iPad the app is well worth downloading and looks like it will add some value to a cable subscription.  I'm not sure that I will end up using it that much given its limited functionality and the presence of more-fully-featured actual TVs in my household.
In terms of the business dispute, TWC is taking the position that because the app only works in the home, the iPad is essentially operating as another television and its rights to carry channels on it are covered by its rights in its regular affiliation agreements.  There is certainly a lot of support for the programmer's side of the argument that this is not another television (for starters, no must-carry broadcast channels are carried) and that these rights have to be negotiated separately.
The list of channels carried.  The name is how it appears in the top bar when selected (except for the comments in parentheses or after the dashes).  The numbers do not appear on the guide, that's just a function of this list.