There are some exceptions as noted in white (Crime & Investigation and FX Movie Channel do not appear to be in any DirecTV DBS packages) or blueberry (in the case of FXX, which is in the DirecTV DBS package "Xtra", not "Entertainment" as one would have expected) or light blue (in the case of Justice Central which is in the DBS package "Choice"). Source for the channel lineup list was Todd Spangler's article in Variety. The prices at the top of this chart are the expected retail; as per the marketing piece above, there is a $35 introductory rate for "Go Big" for the first 3 months. 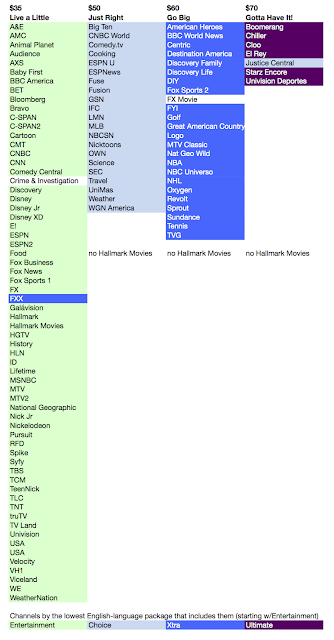 There are some channels in DirecTV's DBS packages that are not in the corresponding DirecTV Now package. Among the more conspicuous absences: Aspire, INSP, ION, Mav TV, Ovation, Reelz, and the shopping services like QVC and HSN. All are independent programmers.

One note on the apparent loss-leader nature of parts of the offer: Prepaying $105 (3 months of Go Big at the $35 introductory rate and getting a free $150 Apple TV) is a good deal even if you don't want DirecTV Now. $105 is even less than the $129 that Apple charges for a refurbished unit.

Another take: Peter Kafka at Recode sees this is as "a national competitor" to the "regional fiefdoms" of cable operators with "more to come".

Another take: Todd Spangler at Variety quotes analysts saying DirecTV Now's most attractive package is a money loser. Earlier he wrote about skinny bundles potentially killing to pay TV ecosystem, back when he thought DirecTV Now was a skinny bundle.
Posted by Peter Litman at 4:51 PM