Over-the-Top Video and The Innovator's Dilemma

Everyone in the ecosystem is wondering about the future of multichannel television and no one knows what to expect. A good theory can help sort out the unknowable. In this post, I will work through what The Innovator's Dilemma theory suggests for over-the-top video and multichannel television incumbents. The fit of theory and subject is pretty good and helpful for seeing the forces shaping offerings into the future.
Clayton Christensen's The Innovator's Dilemma is a highly influential book about business markets, particularly what happens when a disruptive new technology appears on the scene.


An innovation that is disruptive allows a whole new population of consumers at the bottom of a market access to a product or service that was historically only accessible to consumers with a lot of money or a lot of skill.

Characteristics of disruptive businesses, at least in their initial stages, can include:  lower gross margins, smaller target markets, and simpler products and services that may not appear as attractive as existing solutions when compared against traditional performance metrics.  Because these lower tiers of the market offer lower gross margins, they are unattractive to other firms moving upward in the market, creating space at the bottom of the market for new disruptive competitors to emerge.

The disruptive innovation definition above is a good fit for over-the-top video, notably YouTube and Netflix, but also Hulu, iTunes, Amazon Prime and Aereo. All these services are, in some form, arguably lower quality and, individually, less expensive relative to multichannel subscription television ("cable TV" for short). If you have cable and try to recreate cable TV by substituting one or several of them, you will probably be disappointed overall. (Many have tried cord-cutting and written about it.)

[The one part of the definition that does not fit is that it is not accurate to say that cable TV "was historically only accessible to consumers with a lot of money." It is clearly a mainstream service by any measure. The service that requires "a lot of skill"? -- that's probably BitTorrent.]

Christensen's theory is that eventually the improvement of the "inferior" new product gets a toehold in a small market that is ignored by the incumbent. Gradually the new product improves, largely through technological advances. Over time that product becomes a better and better substitute for the incumbent product and then, usually all of a sudden, the economics of the incumbent's business are destroyed by the newcomer.

Applying the theory to this case, the toehold market for over-the-top video may be mobile. Selling a separate mobile subscription was basically impossible, as Qualcomm found with its Flo service. However, multichannel television was (and largely is) unavailable on a smartphone and all of the top over-the-top services are easily available on such devices. 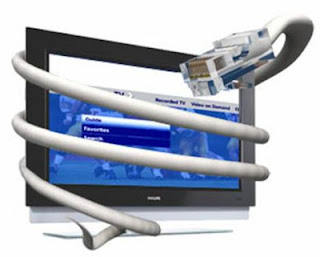 How does over-the-top video (OTT) become a bigger threat to the multichannel TV ecosystem:
The frightening thing for the incumbents is that none of these developments above require OTT services to do anything other than what they have been doing. Notably, they do not have to take on the risk of making a frontal attack on cable and licensing the popular cable channels.

Even more frightening for incumbents is there is a strong recent history of mobile solutions devouring home-based solutions. More than half of households don't use a landline phone and portable digital audio has done a similar number on home high-fidelity equipment. It is lost on no one in the TV business that this happened without cellphones ever sounding as good as a landline nor an mp3 sounding as good as a CD.

The usual strategy for incumbents, well described in Mark Suster's excellent blog post Understanding How the Innovator's Dilemma Affects You. is that the incumbent provider increases "spending on features / performance / functionality. They gather with their cadre of high-requirement customers and have planning sessions about how they can make even more performant products."

Cutting the price is not an appealing option for the incumbents because they do not want to reduce their profits and cannot cut their prices (and costs) sufficiently to compete with the upstarts. After all, these are big, successful profitable business -- they can't throw that away. So, instead the incumbents respond to the competitive threat by improving the product.
The problem with the improving-the-product strategy is that it does not work in the long term. As Suster puts it "customer requirements don’t grow exponentially relative to their existing line [i.e., current service]...over time to the new entrant's functional offering [gets closer to the incumbent's] and there is a huge and rapid sucking sound that pulls the bottom out of the market as waves of customers 'trade down.'” In other words, the multichannel distributor can add all the value it wants, but that doesn't mean the consumers will continue to see their expensive package as their best option in the marketplace.

[A multichannel distributor, of course, could always cut its costs by dropping channels, especially expensive ones. However, given the competition between cable, DBS, telco TV and upstarts like Google Fiber -- such a strategy would certainly hurt its attractiveness to the large mass of consumers who want multichannel television. Inviting current customers to shop for a new video provider by dropping their favorite channel might also lead to such customers finding a new broadband provider as well.]

So, that means OTT going to kill cable TV, right?

I don't think that is clear that cable TV is a goner. Unlike phones and stereo equipment, home TV screens have gotten much bigger in the past decade. High definition and DVRs have improved the in-home TV experience. If consumers have spent more on home entertainment gear, it seems somewhat incongruous that they would be willing to forego the premium television content that takes best advantage of it.

The role of content in this marketplace seems like a different factor than anything in Christensen's theory. There is nothing quite analogous (from the consumer's perspective) as a supplier of content for a disc drive or a piece of construction equipment.

OTT providers have some of the content from cable TV -- Aereo provides the live broadcast signals, individual programs are available on Hulu, Amazon, Netflix and iTunes. Live sports is available, via the "season ticket" out-of-market packages from MLB, NBA and NHL, but the more popular local teams and national games are not. There is a lot of original content available on Netflix and YouTube at various levels of quality. It is fair to say that the pay TV ecosystem has locked up the early windows on much of the best content that is available on TV and OTT might not be able to offer a material amount of that for a long time.

Still, as Howard Beale notes in Network, one of my favorite movies, TV is primarily in the boredom killing business, and at some price, not everyone needs a full package of first window premium content to kill their boredom.

What seems more likely than the decimation of the pay TV ecosystem, is its gradual move to become more of a luxury good, rather than a 90%-penetrated household utility. The opportunity for OTT video certainly increases as the spread between the cost of cable TV and the OTT alternatives increases. Netflix streaming (and Aereo and Hulu Plus) has held at $7.99 (each) per month for a while, but that might not hold in the future.

The more interesting question is: how do the programmers respond to the (inevitable) decline in the number of multichannel subscribers?

It seems unlikely that programmers will sell their linear services whole to the OTT providers, since the OTT providers probably don't want them [Aereo is the exception, since it is in the linear streaming business already. It will likely add some basic services to join last-year's addition, Bloomberg, and adding premiums that can be sold a la carte like HBO or Showtime or Starz would appear to be consistent with the Aereo model. It is less clear if those programmers would be willing to sell to Aereo, after all Starz famously stopped selling to Netflix because it was messing up its value proposition for pay TV distributors.]

What's likely is that programmers will sell greater amounts of individual programs to the OTT providers -- that is just a bigger play on something they are doing already. Disney's recent deal to send new, original Marvel programming to Netflix is a great example of this. In the past, Disney would have taken this programming -- which is not needed by its current cable channels -- and created a new cable channel.

Defining programming more narrowly -- around the cable networks' brands -- the picture gets fuzzier. The big distributors are not enthusiastic about paying higher license fees for cable networks, but the greater competition in the distribution market has led them to do so -- they can't afford to be without top channels for too long. While conceding the money, the distributors are looking for added value in those deals (e.g., TV Everywhere rights, expanded VOD rights) and one form of added value are longer windows in which the programming is exclusive to the cable network and does not appear on their websites, Hulu, Netflix, et al. After DirecTV settled its standoff with Viacom in 2012, its chief negotiator said “My expectation is that they will not increase the amount of free programming they have online.” The story after Time Warner Cable and CBS settled was similar -- digital rights was the contentious deal issue.

Since the movement of programming on a show-by-show basis is inherently fluid, the speed at which content goes from the cable TV ecosystem to the OTT ecosystem (and possibly back again, as in the Fox-Comcast library deal) can and will ebb and flow with the prices being offered.

This fluidity might suggest that the fit of The Innovator's Dilemma to the disruptive innovation of over-the-top video is not perfect. Cable TV is a mass market product, not an expensive, exclusive one, and it is not just a product, but also a distribution channel for content. This disruptive innovation may reorient the marketplace, but not lead to only a single winner.