Pandora is Not the Future of Television

Peter Stern, the Time Warner Cable Executive Vice President and Chief Strategy Officer, sent the cable media abuzz with his comments at a recent industry conference that television is going to evolve into a Pandora-like experience. With all due respect, by and large, that's not going to happen and it has happened already.

Pandora, for those unfamiliar with it, is an Internet-delivered service which is most easily thought of as a substitute for listening to the radio. On the radio, a series of songs are played. Songs are short-form programming -- usually 2 to 5 minutes in length with some exceptions. The listener expectation is that there will be variety, but within a limited area. No one expects to hear Mozart after Madonna on a commercial radio station, even if some people undoubtedly do listen to them back-to-back at home. That limited area in radio is called the station's format (e.g., Top 40, hip hop, rock); in Pandora the format is formed by algorithm from the user's initial choice and subsequent thumbs-up/thumbs-down feedback. It is the nature of a short-form medium that making a dozen or more programming choices per hour of listening would require some work on the part of the listener. Another quality of short-form programming is that a bad song (i.e., one that the listener does not like) lasts a relatively brief time. Also, radio is an audio-only medium. It is common that listeners use it while participating in other activities, like driving a car.

Television, in contrast, is a long-form medium. Programs are typically 30 or more minutes long. A viewer typically does not need to make more than one programming decision for an hour of entertainment. Second is that a poor programming choice (e.g., a bad show) lasts a lot longer than a bad song. Third is that television is used more frequently than radio as a primary activity. In fact, some television programs are pretty difficult to follow without paying attention.

As many have pointed out, YouTube Leanback has been doing the Pandora-for-video thing for years...without getting a whole lot of traction. 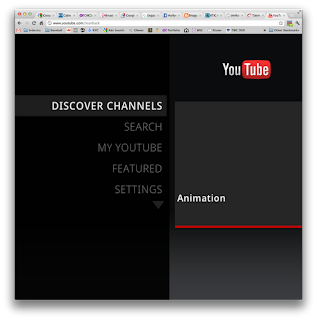 It's not usually too much work for the viewer to select the next television program.  Also, even more importantly, there is already a great passive system for watching television. It's called "not changing the channel". Cable channels are often formatted by genre, not unlike radio stations. All television channels - niche or general entertainment - pay attention to audience flow when setting up their schedules. "Channel up" and "channel down" are simple, if crude, controls for finding another program, and often pretty useful for channel lineups organized by genre (and they'd be much better if viewers could organize their lineups themselves, per an earlier post).

One area in which Peter Stern's observation about a Pandora-like future is spot on is in video-on-demand. The video-on-demand experience generally sucks at segues -- a DJ's term for the transition between two songs. A show ends and then the viewer is deposited back at a screen where the show was originally selected. Is the most likely thing that I want to do after watching a show is to watch it again? Music videos are a popular part of Time Warner Cable's Video on Demand offering. This is what the screen looks like when your choice has finished playing.
Netflix is better. After watching Season 1, episode 4 of Mad Men, it will make it very easy to zip right into episode 5. It's my experience that Netflix's recommendation engine can be pretty good at turning up suggestions of things I might like, but I have rated about 100 movies to give it something with which to work to understand my tastes. (And that works well if only I rate the movies; it gets pretty wonky in a household with mulitple members with disparate tastes).

Lord knows there are some elements of TV navigation that need work, I would humbly suggest Peter Stern sic Pandora on those first.