On 7 July 2011, Time Warner Cable released its second version of its popular and within-the-industry controversial iPad app.  The app take some major steps forward adding significant functionality, but seems very much like a work-in-progress rather that a polished piece of software.


The first noticeable change in the 2.0 TWCable TV iPad app is that its splash screen is now purple, unlike the avocado shade of 1.0 (my review here).  Branding people will note that TWC's web site is blue with a white logo, some of its trucks are painted with a lime-colored logo on a white field and this app has a white logo on a purple background.

The second change is the semi-persistent navigation below offers 4 choices:  Live TV, Guide, DVR and Settings.  Previously, the only function was Live TV. 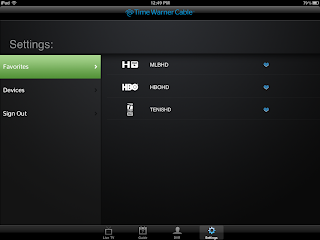 Starting with the most mundane, Settings has 3 choices:  Favorites (your list of your favorite channels -- which starts out empty), Devices (which set top box do you want to control via the iPad) and Sign Out. 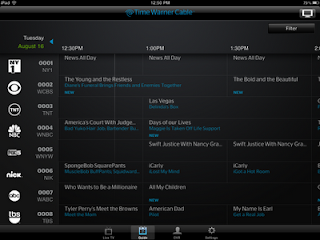 The Guide button adds new functionality -- the ability to use the iPad app as a remote control for a set top box.  The guide is the familiar scrolling electronic programming guide (EPG) from digital cable.  It launches on channel 1.  It is not the guide for the channels on the app.  When a channel is touched, the user is given the choice of "Watch Now" or "Add to Favorites".  The guide does not require that you look at all 1000 or so channels on the system, it gives a choice of 3 views:  All Channels, Favorites (more on this later) or just the HD channels.  One missing choice, that would seem to be an easy addition would be the list of the channels to which the users subscribes; this would also be much more useful than "All Channels". 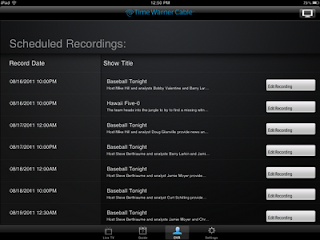 DVR also adds new functionality -- the list of Scheduled Recordings on the connected cable box, but not what has already been recorded (and, there is no way to play those recordings via the iPad).  This functionality is provided on TWC's website.

Live TV works much as it did in 1.0, except that users have lost the "Last Five Channels Viewed" navigation option from the previous version.  That's a step backward -- it was one of the innovative navigation features (i.e., something other than a scrolling guide and channel up/channel down).  The Favorites list does not apply to Live TV viewed via the app, only to the set top box guide.

There is significant latency in switching channels.  The app also seems buggy, it crashed twice on me in a short period of time.

There are 15 new channels on the app:  Africa, Cooking, Discovery Health & Fit, DIY, ESPN Classic, Gol, Gospel Music, Great American Country, Jewish Life, Mav, Shop NBC, Smithsonian, Tennis, Universal and Word.  Seven of these are SD, the other eight are HD.  Live sports events have been beefed up with Gol and Tennis, previously only Golf was in that category (ESPNews and ESPN Classic don't show live events).

In terms of new programming ground, the app now contains HD-only services (Smithsonian and Universal), the previous version did not.  The other broad categories of what is not carried continue to be:
Channel list in the order they appear in the app is below (which is slightly changed from before).  By my count there are 83 channels.  For those scoring at home, 22 are SD (at least 3 of which are carried in HD on the system - Bloomberg, Cooking and Sundance).  Time Warner Cable is claiming that there are more than 100.  The reason for the discrepancy might be that some of the channels are not available on my system and that I do not subscribe to some of the channels (although I get most everything TWC offers in Northern Manhattan).  I have confirmed that TWC only provides access to services which the subscriber receives on TV. The new additions are in italics:

No longer on the app -- Wedding Central, which was shut down on July 1, 2011.  This review is of the Version described in the iPad Settings section as "Developer Build", for reasons that are unclear to me.  It is Version 2.0.0 in iTunes.
Posted by Peter Litman at 5:43 PM